You might remember that some years ago, voice recognition was the new cool thing. Geeks would impress people with their cool new smartphones, which could turn your voice to text with the help of some apps. Well, those days are far behind. Voice recognition has evolved since then.

From just plain Speech to Text, which it sucked at (especially if you’re not from the US or the UK), voice recognition has transformed into a decision engine, which can not only accurately input your speech as text, but also understand and use it.

It’s significantly easier to use your voice to perform tasks.

You can make your phone an assistant.

And not simply the fundamental features, like telling your phone to text someone, but vastly more complicated tasks which require some degree of intelligence.

The straightforward Speech to text software won’t suffice any longer.

To improve phone usability, to ensure that anybody, especially seniors can benefit from the advantages of a smart phone, we need better voice recognition.

Here’s where Api.ai comes in.

Api.ai provides designers and firms the advanced tools they have to build voice recognition that connects with you on a deeper level.

Their framework helps a myriad of programs to effortlessly integrate with intelligent voice recognition.

Their process isn’t restricted to free speech recognition, but rather is a lot more than that. Voice recognition isn’t enough for full usage. 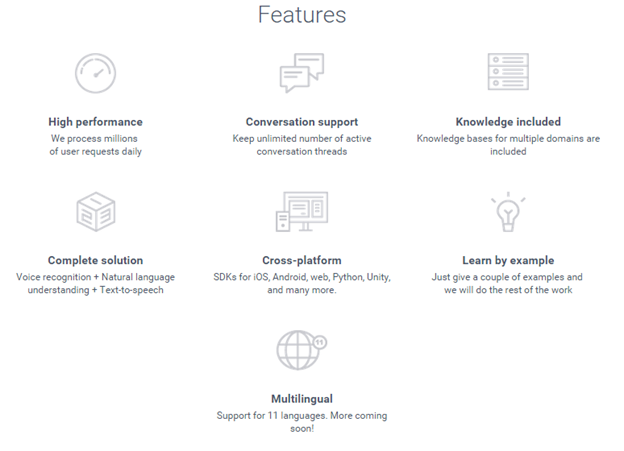 The current voice recognition technology only focuses on narration. Your phone simply detects words, but it doesn’t understand them. Without understanding, it is impossible to function as an assistant.

But Api.ai is more than that. It learns many things. It recognizes even more. It can learn your intent, which can be especially useful when it comes to suggest improvements in your schedules.

It also has the ability to understand catchphrases and common figures of speech.

Just this ability alone can make this software exceptionally useful.

People no longer need to use their hands to operate their phones.

And they won’t have to use inaccurate voice recognition either.

Through Api.ai’s integration with numerous applications, it is now possible to instruct your phone to do things like an assistant. Not just some mundane everyday tasks. But anything you can think of. Anything you can talk about. Just imagine the possibilities.

Add to that the fact that Api.ai is free for small-time developers and extremely affordable for small firms.Api.ai is bringing a gradual revolution in the field of voice recognition, and you can expect it to continue to do so.

If you’re a developer, why not be a part of it?