Skip to content
Tech, Tricks
Facebook is one of the biggest Social Network.This is the biggest network in the world.Now it has crossed One Billion Active Users.This was announced by Mark Zuckerberg  who was an founder of Facebook.He announced in the Facebook official blog with some quotes given bellow.This is an happiest news for the Facebook Users.He also shared a note of celebrating the milestone by giving his personal thanks to the Facebook users with an beautiful quotes which was given bellow,

” This morning, there are more than one billion people using Facebook actively each month. If you’re reading this: thank you for giving me and my little team the honor of serving you. Helping a billion people connect is amazing, humbling and by far the thing I am most proud of in my life. I am committed to working every day to make Facebook better for you, and hopefully together one day we will be able to connect the rest of the world too.“ 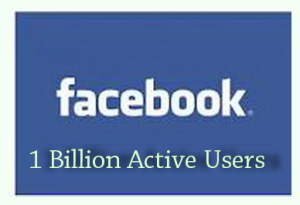 Lets see somethings about the Facebook from the birth till today,

If you like this article please share this with your friends and subscribe to get many latest reviews via email for free.If you have any Reviews and Tricks means share it with us through Guest Posting at Triposoft.