Photos are the sign of our unforgettable memories. Those photos can remind our past incidences and will make us to feel better. Though the photos remind us our past moments we need to add some effects to it. There are many app available for editing the photos after snapping them. That too the availability of photo editing apps for Android mobile is more. So for having quality photos you need to snap those using better cameras and to edit them using best photo editing apps/tool. 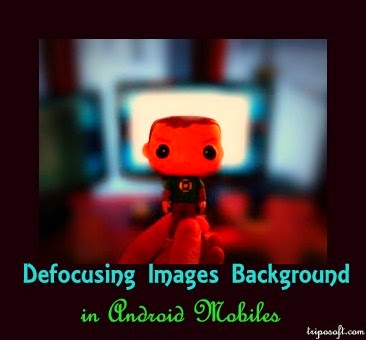 While editing photos, many of us like to use an awesome effect called Defocus/Focus. Focusing the photos is a process of adding blur effect as a background for your photos by focusing some main character. This makes the photo pretty and cool! There are many apps available for achieving this task which can be found at Google Play Store. Even some devices like HTC M8, Galaxy S5, Sony Xperia Z don’t need to have these applications because they will have some inbuilt features which may be similar to DSLR camera. So I’m here to share about focusing the Image Background in your Android mobile in simple steps.

Steps to Defocus the Image Background on Android Devices..

Google Camera is a new app released by Google last month. Now a days this app is pre installed in many devices. If you need to use this app on your device, then you can download it from Google Play Store. If you install this app, it will replace your default camera app that comes on any device which runs on Stock Android. This app is easy to use with better user interference. Here the most awesome thing present in this app is a new feature added by Google called Lens Blur. This effect will make your images to focus on one object and make the background blur. Users also allowed editing the focusing option later. The only disadvantage of this app is the requirements. For running this app you need to have the latest version of Android KitKat 4.4 or higher. If you have so you can have some fun with it!
Download Google Camera from GooglePlay

It’s a best application for editing photo that too for adding focus effect. Sometimes this application will automatically focus the main object or it tends the users to draw lines around the object which should be in focus region.  And the remaining area which is the background will be added with blur effect. This is an awesome app which you should try it on your device. This app is available on Google Play store.

Sony Background Defocus is an awesome application available for all Sony Xperia series devices. Even you can download it from Google Play Store if it suits for your device. SBD has the feature to take two photos of an character or object. After taking a shot, the user need to select the character or objects which they need to focus and adding blur effect to the second image. The second image/shot will be your background for the focused object before. SBD also offers user to edit the focused image by adjusting the blur level and more. Think so the only camera quality secret behind all Sony Android devices will be this one.

So folks, if you have these apps on your devices then if won’t require you to use DSLR cameras and other gadgets. Kindly share your thoughts in comments below. Cheers J