Skip to content
Google, iPad, iPhone, News
When I comes to major tech news, I didn’t expect to hear much from Google.Google Updated Google Search App so it is available on iOS devices,in other word Google Search Apps is now available for iPhone and  iPad. Recently after releasing the Google Glass,Google has updated its iOS app for Google Search.  Google is concentrating on iOS user because there are more numbers of iOS users than the Android Users.From today cards on iOS because it does not have the permission to run in the background while using it. 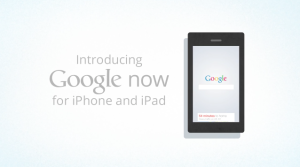 Check it out : Amazing Features of Google Glass

But then, the iOS’s background location tracking features is enabled so thanks iOS.And this will let you to keep this application for tracking  your data. The same features on the Google Now for the Android will not work as it is for iOS.There’ll be some changes in this new apps for iOS.This application will not use the iOS notifications to push important updates.For that you need to look into the Google Search app to know your recent updates.Share your thoughts in comments !

Here’s the official video of Google Now for iPhone and iPad: