Skip to content
Mobile Circle, Reviews
As the technology development increases the usage on Mobile also increase. The mobiles users are increased than the previous year and the mobile manufactures are launching various smartphones every  month to impress all mobile lovers. So describe l those I surfed over internet and I found an awesome content with all info I excepted. And I decided to share with you too. Here in this article, you can get every info about the mobile users for the past years. This year may be a mobile trend for all. Here are some of the trends on mobile phone market in 2014 till now. 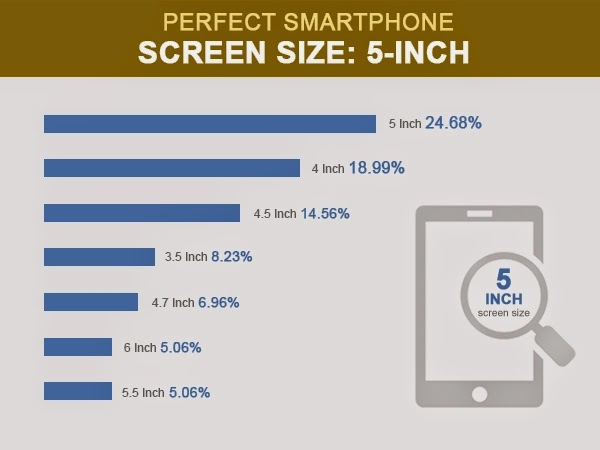 Do you like a phone with 5-inch screen like Samsung Galaxy S5? Can you make do with the 4.7-inch screen of the HTC One? Or is the Xperia ZR with its various display technologies that has caught your eye? Except Apple, almost every mobile device maker has brought various screen sizes on their devices to the market. But while touch-screen phones were a rage some years back, what actually has become a pulling factor now is the screen size. So much so that it is only the touch-and-type variety like BlackBerry Q10 which have a screen smaller than 4 inches. Hence they fail to lure in the user to buy them when he/she has the option to buy a full-touch phone with a big display.
Such a shift in consumer preferences has made screen size an important factor when it comes to purchasing a smartphone and for handset makers to bring new devices to the market. This is evidenced by the fact that more phones featuring 5-inch screens have entered the market than any other screen size. So much so that almost every flagship phone is coming with a screen size of 5 inches or more. The average screen size for phones launched in 2014 is 2.91 inch. Compared to this, in 2013, the average screen size was 2.47 inch, with only 22.67% of phones having a screen size of 5 inches or more. 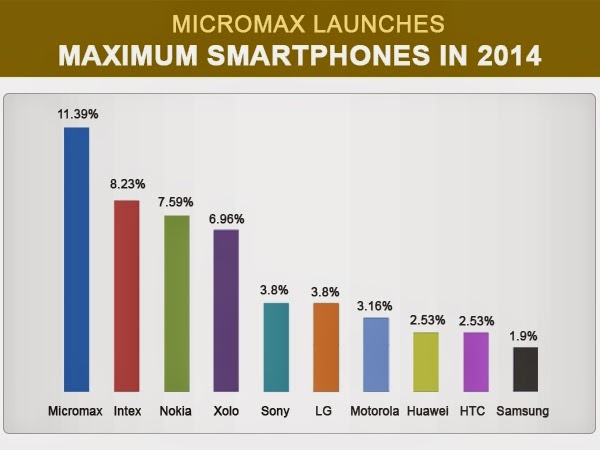 It has been a difficult road for indigenous smartphone maker Micromax to actually survive in the intensly competitive market. It has not only survived but has moved on to be among the top three players in the Indian smartphone market in terms of market share. Hugh Jackman a.k.a. The Volverine could turn down the offer to join with other mutants but Micromax roped him in as its brand ambassador. Since then, it has been on a phone-launch spree, bringing handset after handset to the market across price ranges.

This year some of its landmark launches include the Moto E competitors, the Unite2 and Canvas Engage, a host of other smartphones and as a first, it has even launched two Windows Phone devices. It seems Micromax is leaving no stone unturned to gain the maximum share of the smartphone market.

In contrast, Samsung has only launched 4 smartphones in the Indian market this year. It is understood that flagship smartphones have their own charm in the market. They are futureproof, have amount of features that would shame even automakers, receive special attention from their makers and hence, charge the consumer a premium too. But the market really belongs to the manufacturer whose product appeals to masses and that is what budget phones are made for. No huge cameras, no massive storage spaces and forget software updates and upgrades in many cases too, but they still can reach more people than a flagship smartphone would in its entire lifetime. What better than offering the latest of stuff in a device priced below Rs 10,000. Absolute delight!
Since the launch of Moto E, suddenly the price range of Rs 10,000 and below is seeing a lot more high quality smartphones being launched. Till now in 2014, more smartphones in the range Rs 5,001 – Rs 9,999 have been launched than just about any other price bracket, targeting the first time smartphone buyers. 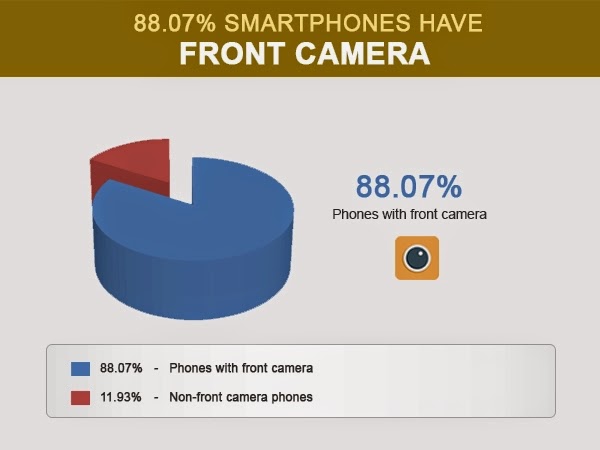 Front camera was supposed to serve one function: Video Conferencing. Since that one word called Selfie trended, front camera has become a must on a smartphone, irrespective of its use and frequency of use. The word went on to become the word of the year and the front camera a necessity. But just a front camera was not enough, it needed to click good quality selfies too. The front camera megapixel war is not the concern here, but the fact that once a luxury feature, the front camera features on smartphones across various price points. 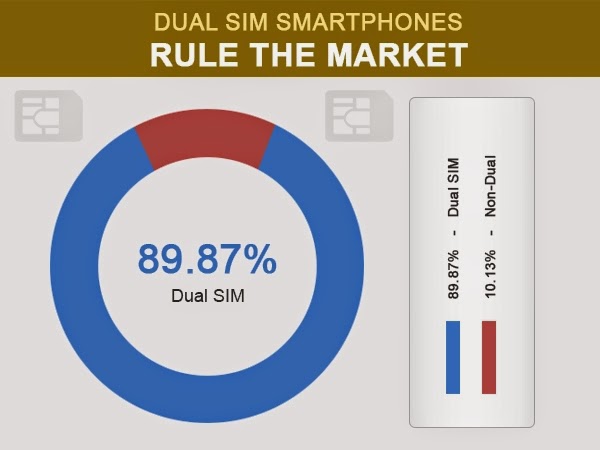 You would remember that person who attended calls using one phone and called someone using another phone in the metro trip to your office? Such has become a norm as many people are trying to balance two phone lives, one for the masses and the other for their near and dear ones (they can be used for other purposes as well). But taking care of two devices is difficult and necessitated the introduction of dual-SIM smartphones. Now, people can still call using one SIM and answer the other one (not simultaneously though), but they do not need to carry two handsets. If that was not enough, smartphone makers have also taken this trend seriously and introduced a host of dual-SIM capable smartphones in the market.

Leading the race are all indigenous phone makers like Karbonn, Lava and Xolo. But the big brands are also taking note of this trend. HTC introduced a dual-SIM variant of its flagship device One last year and there is no reason to think that it will not do the same this year too. 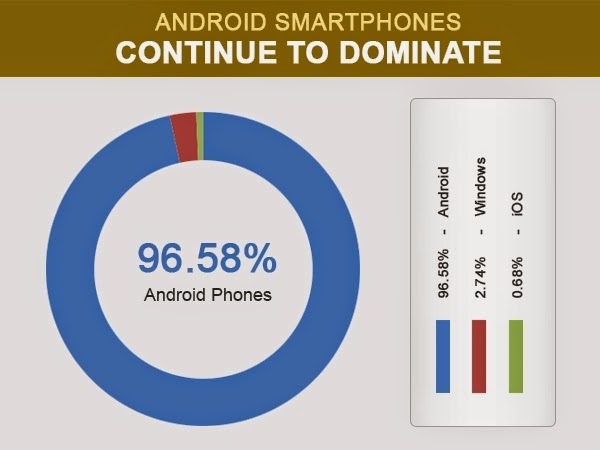 Android has penetrated deep in the smartphone market. Being an offering from Google, it has mass acceptance from users. Its open-source platform and a plethora of apps makes it a very lucrative proposition for smartphone makers. Unlike iOS, Windows Phone and BlackBerry OS, Android can be tweaked to work on a variety of devices with varying hardware specifications. It is this flexibility of Android that has caught every phone maker’s eye. The result? We have Android smartphones which cost as little as Rs 5,000 and as high as Rs 45,000 and all of them get picked up regardless of who is making them.

High cost of iOS devices and less apps on Windows Phone marketplace has just added to Android’s surge in the market. Moreover, BlackBerry with its latest BB10 OS has also been forced to side load Android apps, further boosting the latter’s popularity in the market. As a result, Android continues to command a huge market share over the years. 2014 is no different as  97% market share in all the phones launched in India this year have Android OS and more are to follow.

Even after having been in the market for more time, iOS has lost ground to Windows Phone devices, because of the high cost of Apple devices, and India being a cost sensitive market with sweet spot pricing at under Rs. 10,000. 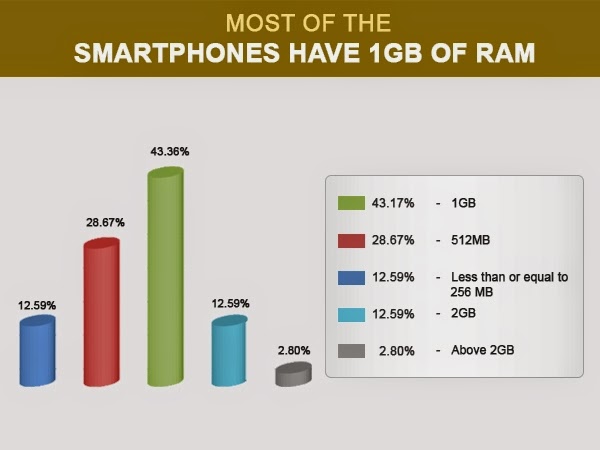 Nowadays one of the deciding factors when it comes to smartphone purchase is the amount of RAM the device has. While it is a non-issue for Apple fans and BlackBerry users don’t give it much thought, it is of grave importance to Android and Windows Phone users. Hence, it automatically ranks highly on smartphone makers’ list as well and a reason why flagship devices get picked up from the market really fast.

Nowadays, 1GB RAM has become so common that some devices in lower price ranges also come with 2GB RAM. In 2014 so far, 90 phones have been launched with a RAM of 1GB or more, compared to 93 phones in 2013.

Hope guys you like these info on mobiles usage till now. And I like to thanks PriceBag for sharing this awesome content with us. Kindly check out their blog too for more info. Do shares and comments below!