Skip to content
Tech
This was first announced in US on January 7,2013.And now it was released in US on April 23,2013.The ASUS Cube does everything one would expect from a Google TV set-top box, but it also has a few tricks of its own, like a mic for voice search and a unique “Cube” main menu interface.The Sony NSZ-G57 just like this only.It cost just about $129 USD.It was enabled with many features.It will available only in Black Color. 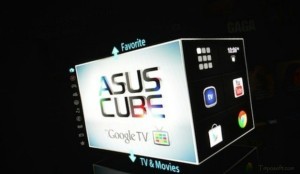 It has both Audio and Video Services for various site.For the Audio the site like Last.fm,Napster,Pandora,etc.,And for the Video the site like,YouTube,Amazon,Netflix,etc.,And it supports Photo viewer.It was enabled with WIFI and with Firmware.I have listed some specification of ASUS Cube Google TV bellow,
Read This : The World’s First USB 3.0 Speaker was Announced

Share your thoughts in comments after buying a new ASUS Cube Google TV! Stay Tuned at Triposoft for getting more latest tech news.