Skip to content
Apple, iOS, iPad, iPhone, Mobile Circle
Angry Bird Game Series was released by an awesome company called, Rovio. There are many version in Angry Birds which hits all the game lovers throughout the world. Now, a new version called ” Angry Bird Go! ” has released for the iOS devices. This is for the 4th birthday for Angry Birds. Now you can enjoy by playing this new version by downloading for the App store. This is an racing game available for free. You can get this app in-app-purchase. This new version brings an 3D effect gaming experiences with the awesome Angry Birds. In this game the main villains is Pigs. In this game also pigs characters are included. In this new game there are different tracks, different game modes, with massive power ups and with more upgrades. 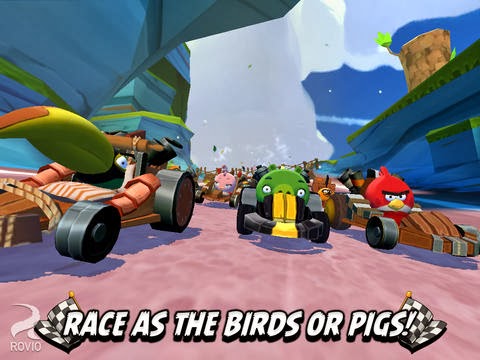 Welcome to downhill racing on Piggy Island! Feel the rush as you fling those free wheeling birds and piggies down the track at breakneck speed – with plenty of twists and turns in a thrilling race to the finish line! But beware! Look out for hazardous roads, mischievous opponents riding your tail and special powers to put the race leader behind the pack. Plus, go from soapbox car to super car by upgrading your ride! Ready…Set…Angry Birds Go!

“Angry Birds Go” racing Game comes out with fantastic graphics. Here the race is between the Bird or Pigs, even you can race with those characters. Here the developers have brought some popular characters like Red, Chuck, Terence, Stella, King Pig, and more. You can control this game by using either touch screen or your mobile accelerometer. Hope you’ll have some fun with this.

Just click the below given download link for downloading the new released Angry Bird Go from the app store.

Hope you can have some fun with this game. Just share your gaming experiences with us in comments below. Have a Gud Day!! Cheers:)