Skip to content
Blogger Widgets, Blogging, Google, News
By the Way,Blogger Users got a New Commenting Widgets for their Blog.This was announced by Google.Today Google announced that bloggers can now enable a new Google+-powered commenting system for their sites who are using the Blogger platforms.From this you can understand that Users who are using the Blogger can use Google+  as a commenting site,and the comment from the Google + will automatically added into their blogs.This is the main feature of it.But this system was already enabled by Google on all official blogs. 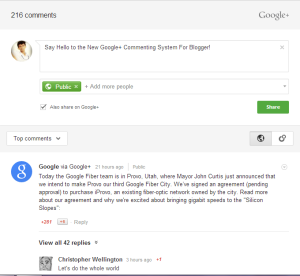 The Google says, will enable bloggers to “see activity from direct visitors, and from people talking about your content on Google+.” For these purpose this new commenting system was introduced. This is very useful for discussion, where the comments are stored in one place.

The comment widget looks quite nice.It is easy to use.Just like Google+, this commenting system doesn’t allow for nested comments.You can take a look on it Here.

Google thought that this new system will make life easier for readers as well as for the commentors  They will get the option to comment publicly – or privately to their circles on Google+. And by the way,the comment published will be seen by both Owner and by the publisher.Don’t worry about the old comments.It will be imported into the new Google+ Commenting system.

Google slightly want to use this to compete with Facebook comments,which was launched in 2009.However it is not our problem.Let’s see how to use this new Google+ Commenting System in Blogger.

It is easy to enable it in your blog.Blogger users simply have to flip a switch in their Blogger Dashboard.
For full tutorial read: How to Install Google+ Commenting System in Blogger?