Recently Sony announced Sony Xperia Z Ultra. My previous post was about the announcement of Sony Xperia Z Ultra.I thinks so, heard about his brother Sony Xperia Z. Here, the luckiest thing is both the gadgets come from the same company. Well this device was excepted by many peoples. Now in this article we are going to discuus about the features of both Sony Xperia Z Ultra Vs Xperia Z. For just now they have did’nt announced it price yet. But, Xperia Z Ultra can be the world’s largest smartphone with its biggest 6.44-inch display. It is like an small tablet. This gadget will be unexpected for the king of smartphone maker Samsung. This big display can beat the Samsung Galaxy Note 3, Galaxy Mega 6.3 and more. 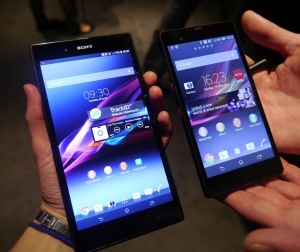 Here are some features of both Xperia Z and the big screen, Xperia Z Ultra.

For the Sony Zperia Z, 5-inch LCD display screen with a resolution of 1920 x 1080 pixels at a staggering 440-ppi.
For the Sony Zpeia Z Ultra, 6.44-inch Triluminos LCD display with the same resolution, but with a pixel density of only 342-ppi due to its massive size. The biggest screen from Sony.

Both the device works in same Operating System which was released recently by Google. Both the gadgets are using Android 4.2.2 Jelly Bean OS.

Sony Xperia Z will cost about $600. And for the Xperia Z Ultra the price yet not announced. And the availabilty of this device is also not yet announced. The approximate value for this gadets if about $700.
Share about this comparison between Xperia Z vs Xperia Z Ultra. Share your thoughts about these gadgets in comments!