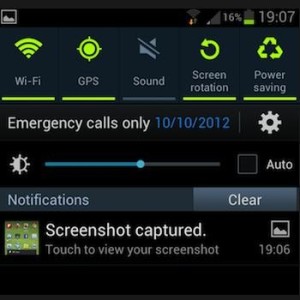 If you are using Ice Cream Sandwich version or above, screenshots are easy to take.And they are built right into your phone already! The only thing that we don’t know.But it is not the problem.Just press the Volume Down and Power buttons at the same time,and hold them for a second. While that time your phone will take a screenshot. And you can see it in your Gallery app.Enjoy !

The Android 2.3 or Below versions doesn’t have screenshot built-in.But some device have it.It varies from mobile to mobile.For example the Samsung mobile has this feature.In Samsung mobiles, you can press the Home and Power buttons at the same time to take a screenshot.This is the easiest way to take an screenshot in Samsung mobiles.

Don’t feel for it if you don’t have the Samsung mobile.You can take an screenshot by using the application No Root Screenshot It. You’ll need to install it on your phone and install its free companion app on your computer, which will enable screenshots.If you’ve rooted your phone, you have a few options. You can install an application Screenshot UX, which will allow you to take screenshots.That’s it ! These methods are the easiest method.There are many methods,but it can’t listed now.

If you have still any doubt or you know the better way for taking the screenshots,feel free to share it with us.And we are waiting for your feedbacks.Stay Tuned at Triposoft.com