Skip to content
Windows
Recently Microsoft launched Windows 8.1 Preview. And now according to some unofficial reports or rumors, the company is also considering a second major update obviously called Windows 8.2.  At this time we don’t know any specification about it. But any way DeviantArt user nik255 has created what he calls a concept imagining “Windows 8.2 Pro Preview,”. And this makes the significant update for Windows 8 that would focus a bit more on the desktop environment. This is so pretty… 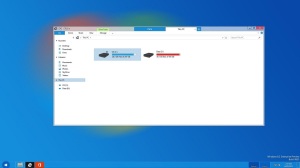 As the above picture says the new upcoming improvements in Windows 8.2. Windows 8.2 Preview concept addresses most visual elements of the desktop. This new version also includes the Taskbar and the titlebar of every windows. By the way here is some new improvements in its Taskbar. In this new version the Taskbar will comes out with the dedicated controls for the media player. And you can find that the Start Button is smaller than the old version. And this new version has a bit more refined than the old version. You can also see there is an separate tab for each new windows. This is not included in the Windows 8.1 Preview.

And note that this is not official announce. The screenshot is just nothing more than a simple design concept. So keep waiting for it and share your thoughts in comments.